Overview
Valorant is a 5v5 character-based tactical shooter broken up by rounds where one team attempts to plant a bomb (or ‘Spike’) while the other team defends plant sites or defuses the spike. Either team can also win the round off of killing the other team before the Spike is planted.

‘First kill’ is a metric used to indicate when a player gets the first kill in a round off an enemy player. However, teammates can trade kills to pad any number advantage that the first blood may have provided. A TRUE first kill (TFK) are first kills that were not traded within 3 seconds by the enemy team, creating a true advantage.

Gathering the data
While Valorant tracks first kills, it does not track TFKs or true first deaths (TFD). Inspired by this tweet made by Weltis, an esports analyst, I was curious about individual player performance when tracking their TFK to TFD.
I chose to use the grand finals from the international Valorant Champions Tour 2022 which just concluded yesterday at the time of writing (July 25, 2022). Public stats were still limited at the time so I scrubbed through the full replay VOD and marked every TFK and TFD on all 5 maps as well as the rounds that had no ‘trues’ due to being traded within 3 seconds by the enemy team. 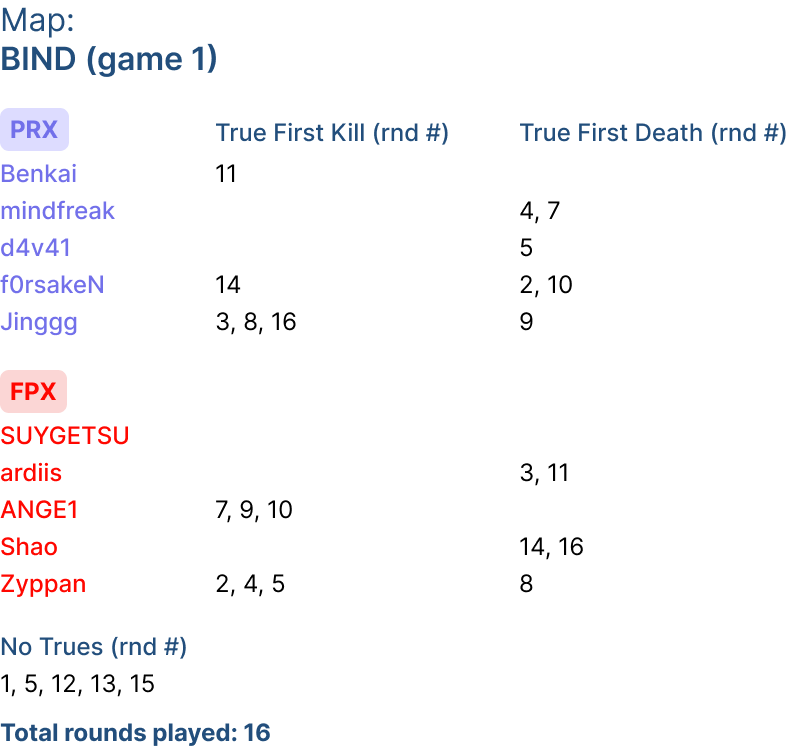 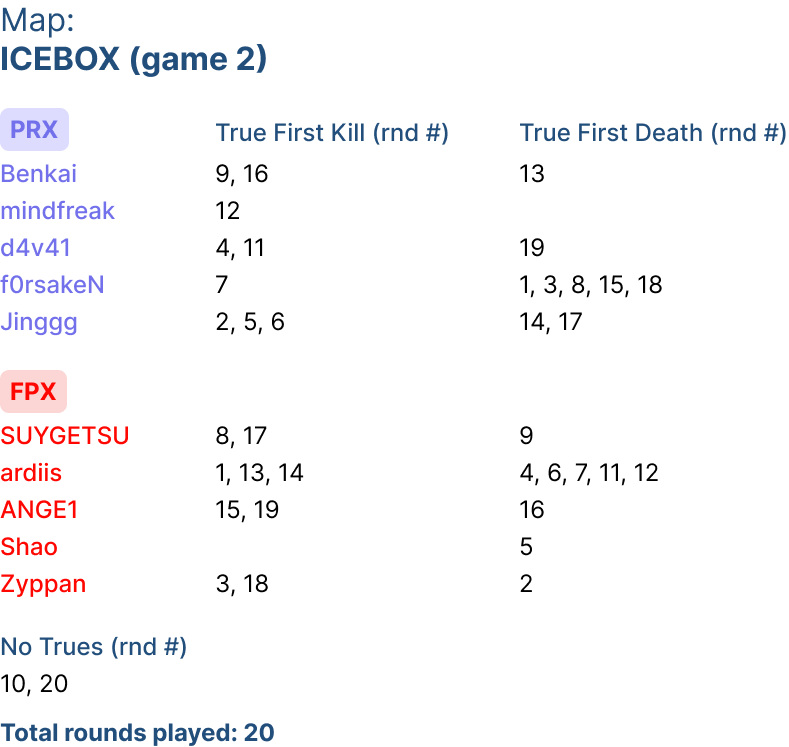 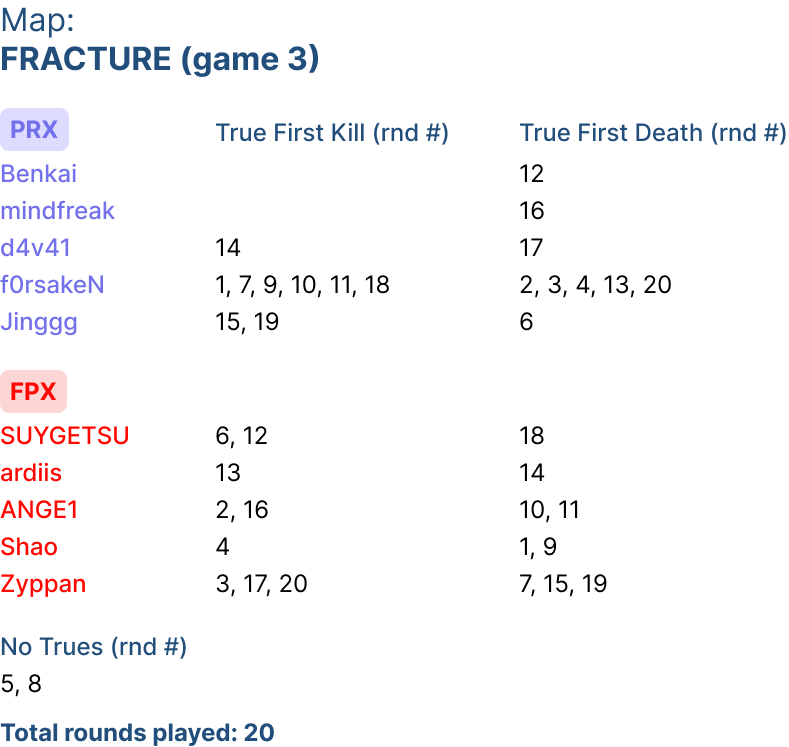 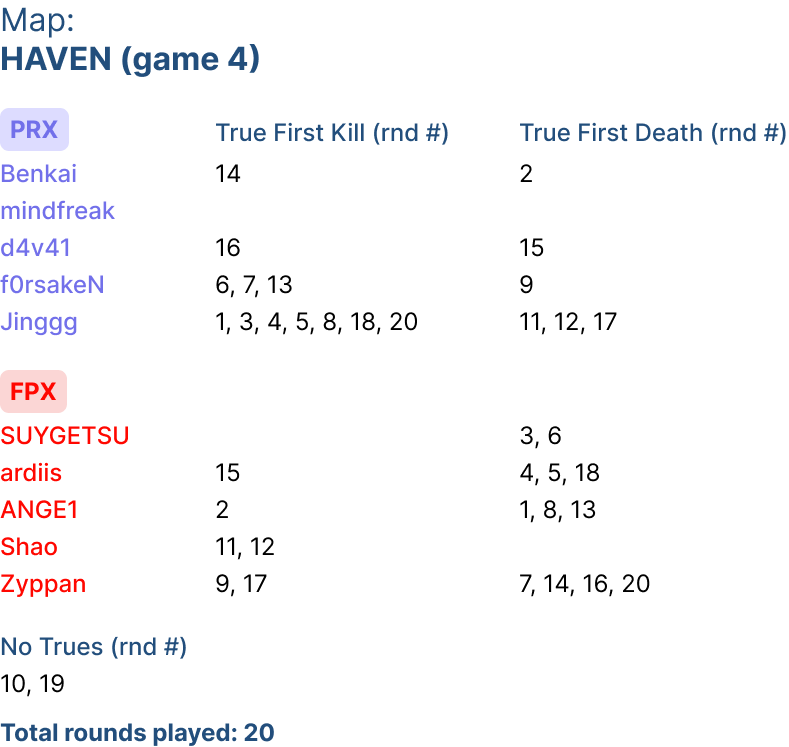 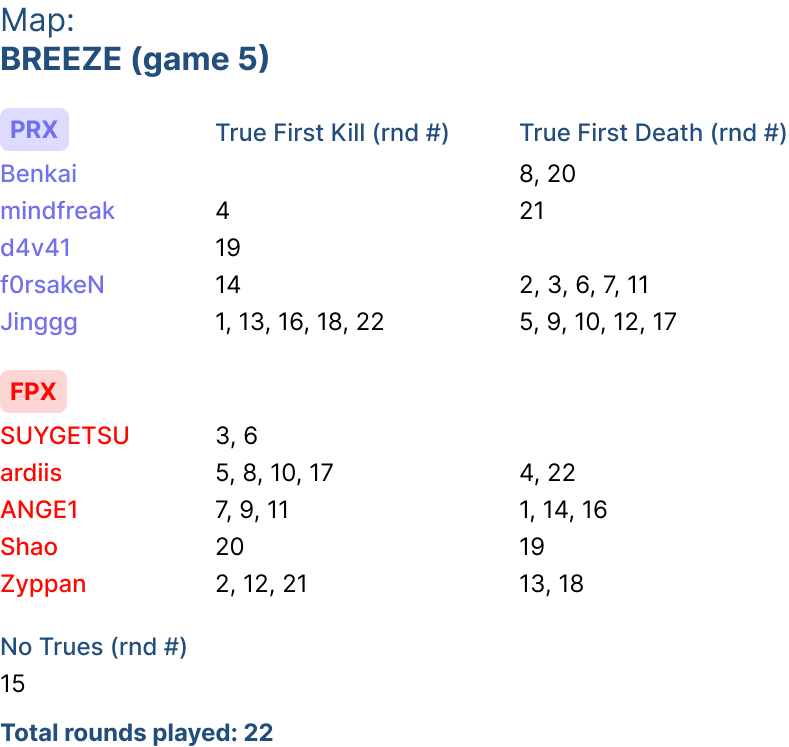 These are the final totals from this whole set:

I mapped the TFK and TFD using a scatter graph in a spreadsheet:

Creating the dataviz
I included an identity line in the final visualization to indicate where X and Y are 1:1. Any point above the line shows a positive TFK/TFD while any point below the line shows a negative TFK/TFD. Using TFD for the X and TFK for the Y made it easier to show positive and negative.
Hover over any point to see its respective player stat:
Conclusion
Capturing TFK and comparing it against TFD is a better representation of in-game impact that Valorant doesn't provide. While Jinggg (PRX) considerably outperformed everyone, FunPlus Phoenix, the winners of this tournament, were demonstrably more well-rounded and consistent.
There are TFK scenarios that aren’t captured here in order to retain an accurate true first blood impression. Future considerations to TFK analyses:
- Multi-kill TFK may get traded, resulting in an 'No True' round, even when there's a clear number advantage (e.g. killing two players at the start of a round but being instantly traded still results in a 4v3)
- The 3 second window for trading is slightly arbitrary (e.g. game 3 on round 11 - f0rsakeN is traded in 4.15 seconds)
↑Back to Top